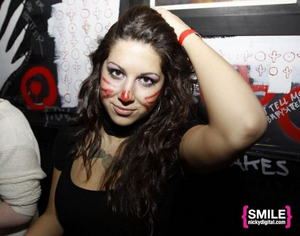 Ears 2 The Ground is an EDM Radio Show, currently on WHCS Hunter College Radio, hosted by Valerie Valentine. It runs from 5-7 PM every Tuesday. Ears 2 The Ground began showcasing EDM talent in late 2010. The show is known for featuring a range of Major artists in different genres, such as Alex English, Sazon Booya, DJ SEGA, Midnight Conspiracy, Gosteffects, Monikkr, JP Solis, and more. The show prides itself on its diversity, showcasing with beats ranging from the deepest underground futurebass to the Electrohouse Beatport 100. Valentine is a DJ/Vocalist born in Argentina, and trained in a variety of classical and contemporary genres. The eclectic backgrounds come together in smashing sets that catch interest from all sides and end with bodies movin' on the dance floor. Sets include Electro House, Dubstep, Dutch House, and more. Although she's only been DJing on the scene for under a year, Valentine has already been wrecking the hottest clubs in NYC, including Irving Plaza, The Gramercy Theater, Santos Party House, Le Souk, Bar 13, The Bell House, DROM, and Falucka, as well as for organizations Dubday Mondays, The Wolf Party, CAT PHACE, The Underground Rebel Bingo Club, and Ears 2 the Ground. In October 2011, she won the coveted spot as Resident DJ at The Wolf Party every Tuesday at Le Souk. Building moment in 2012, she also became the newest addition to the Feed The Starving Artist family, as a Resident DJ for Dubday Mondays at Bar 13 in Union Square. As a vocalist, she is slated to release a collaboration track, 'On Fire' with Monikkr on Rocadence Records later this year. She is also the host of Ears 2 the Ground Radio on WHCS in New York City, featuring guests such as Alex English, Sazon Booya, DJ SEGA (Mad Decent), Midnight Conspiracy, Gosteffects, Monikkr, Soundwavve, and Subset, among others. Valentine has been featured internationally on WFNP, LiveDJUnderground, and Radio4by4. A social butterfly at that, she's had the pleasure of sharing the stage along with DJ SEGA (Mad Decent), Alex English, Monikkr, TJani, Subset, DJ Jess, and Fat-EZ (Sex Cult) along with other good company. In November 2011, she became a part of the record label Hidden Recordings, bringing the latest underground techno to listeners everywhere. For bookings: valentinemusicnyc@gmail.com Twitter: @Valentine_NYC http://soundcloud.com/valentinemusicnyc